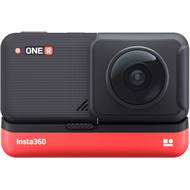 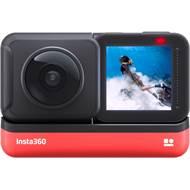 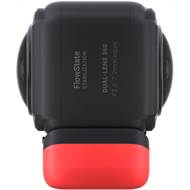 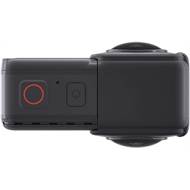 Product added to the basket.

There was problem with adding product to the basket. Please contact our support.

The Insta360 ONE R 360 Edition is a modular action camera system featuring the Dual-Lens 360 Mod lens module, which captures up to 5.7K30 fps 360° videos and 6080 x 3040 photos. Images are stitched automatically in-camera in all cases except when shooting raw photos, which must be stitched using optional stitching software.

The 360 Mod and included Core and Battery Base modules assemble together into a complete system, with the 360 and Core modules mounted side by side. With this entire setup further installed in the supplied Mounting Bracket, also known as the frame, the system can be used underwater in depths down to 16'. (The system is waterproof only when installed in the frame.)

The Core module is the brain of the system and has a touchscreen live-view display, which is reversible so it can be used for selfie and vlog shots. When used with the 360 Mod, the Core's live screen can be swiped in all directions to display your shot from all angles and get a full 360° preview. Whereas many other 360 cameras only allow such previews in a mobile app, the ONE R system provides it in-camera as well as in the companion iOS/Android app.

The mobile app has universal functions and some that are specific only to a particular module. For the 360 Mod, functions include auto-editing, voice control subject tracking, and reframed hyperlapse.

The Core module also offers controls, status indicators, a microSD card slot for up to 256GB cards, and a USB Type-C interface that supports an optional ONE R 3.5mm Mic Adapter. The Battery Base has a built-in battery that provides approximately 70 minutes of runtime when using the 360 Mod, and it's rechargeable in about the same amount of time via a USB Type-C port.

All pixels are not created equal. The Dual-Lens 360 Mod raises the bar with Super 5.7K resolution, leveraging H.265 encoding, advanced image processing and an AI-powered finishing algorithm to preserve detail and make your footage pop.

FlowState achieves gimbal-like stabilization without the gimbal. Thanks to a new scene-detection algorithm, your footage stays clear and steady even in low light.

No drone? No problem.

ONE R's Invisible Selfie Stick feature lets you capture easy aerial angles and unique third-person perspectives with a flick of the wrist while using the Dual-Lens 360 Mod.

Bullet Time shots put you at the heart of the action. Automatic horizon leveling and smart speed-ramping make them easier than ever.

Select your subject with a tap or a voice command when shooting in 360. ONE R's AI-powered tracking algorithm keeps it locked in center-frame. Even when obstacles break your line of sight, Deep Track picks up the shot as soon as your subject reappears.

Highlight key moments with cinematic slow-mo, or speed things up with a stabilized hyperlapse.

Shooting in 360 gives you infinite possibilities and perspectives. Auto Frame uses a powerful computer-vision algorithm to sift through them and recommend the ones that are worth adding to your edit.

Edit on the fly.

Get hands-on with the ONE R app's full-featured editor or let FlashCut handle it for you. FlashCut uses AI to find your best shots and create cinematic clips that are ready to share.

ONE R supports HDR capture for photo and video. Highlights, shadows and everything in between come across just as you see them.

After dark, turn on Night Shot to capture photos that stay natural, clear and vibrant.

Crank up the color.

Color Plus automatically color grades your footage. Vibrant, bright and stunning visuals with a single tap.

Every angle. Every instant.

ONE R's simple, swipeable 360-degree touch screen lets you preview your shot and then play it back to make sure you nailed it.

ONE R is engineered for safe, efficient shock absorption, while the Lens Guards protect your camera's vitals no matter what life throws at you.

ONE R's Stats dashboard lets you overlay clips with HUD data like speed, altitude, direction and route. Map your journeys and track your progress.

You've seen the Invisible Selfie Stick. Now meet the invisible drone. ONE R's customized Drone Mount lets you capture airborne 360 views that hide your drone entirely from sight. Adjust your angle in post to get mind-blowing effects that used to only be possible for professional FPV pilots.